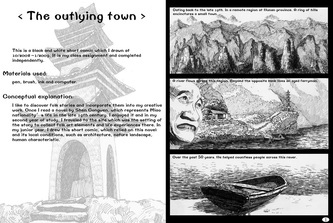 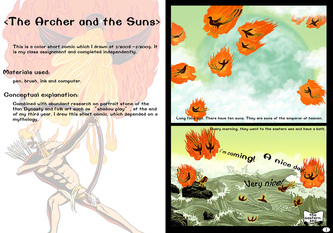 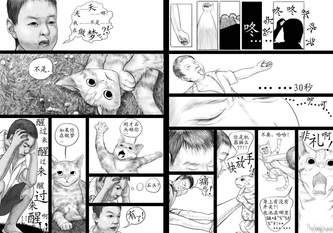 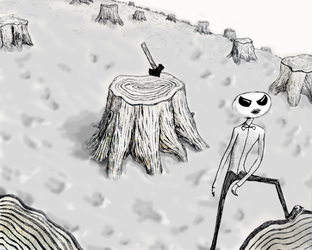 The Archer and the Suns

This is a color short comic which I drawn at 3/2009~5/2009. The story is from a mythology, a very ancient Chinese folk story . Combined with abundant research on portrait stone of the Han Dynasty and Chinese Folk Art such as "Shadow play", I completed this short comic at the end of my third year in my undergraduate study.

This story is about a hero Hou Yi. Long time ago, there have ten suns. They are sons of the Emperor of Heaven. Everyday, one sun would pass through the sky and brought light to the world. During that period, everything was living in harmonious. But one day, those naughty suns all fly into the sky, and caused a dead catastrophe in the world.......
This is a black and white short comic which I drawn at 10/2008~01/2009. I love discovering folk stories and like to incorporate them into my creative work. Once I read a novel by Shen Congwen, which represents Miao people's life in the late 19th century. I enjoyed it and in my second year, I traveled to that site to collect local art elements and experienced lives there. In my third year, I drawn this short comic, which depended on Congwen's novel and the site's local conditions, such as architecture, nature landscape and human characteristic.

This story is about a old punter who lives beside a river. he punts his narrow boat to help people across this river for 50 years. He have a beautiful granddaughter "Cui Cui" and a dog "Yellow". Two years ago, Cui Cui have fall in love with a handsome boy, the village head's second son, at the boating championship. But the boy have made an engagement with a businessman's daughter, and the story begins......

This is an unfinished piece. The story is about a boy and his cat.

These are sketches of a very simple story which I drawn in my first year of my undergraduate study.